Posted on February 20, 2014 by thethingaboutjoan

At least with knitting, you have something to show for it besides calluses, stubby nails or worn-out carpet. In this case, it’s the Arizona socks.

Their progress from cast-on to bind-off was fairly fast, borne of the lingering frigid cold and spanning the Winter Olympic Games. Unlike other WIPs which have gone on vacations or field trips to playgrounds and doctor’s offices, these socks were homebodies. This was where you could find them most nights: 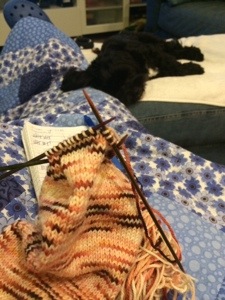 To recap, these socks are the second FO I have this year (yes, I’m cheating and counting C’s green socks which were finished on New Year’s Day).

They have gotten me through: 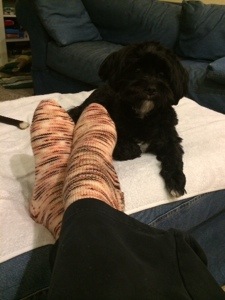 Not bad, little socks. Not bad.

Mom of three who knits a little, bakes a lot, crafts a bit and blogs about it all.
View all posts by thethingaboutjoan →
This entry was posted in Crafts, Knitting and tagged crafts, handknit socks, handmade socks, Mom guilt, Olympic knitting, worrying. Bookmark the permalink.