Posted on February 6, 2013 by thethingaboutjoan

With Valentine’s Day fast approaching, love is all around us. It’s a perfect time for a new Collectively Creative: The Lovey-Dovey Edition. 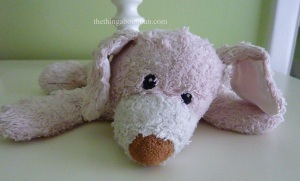 When our twins were old enough to reach out from the stroller to grab random items from store aisles, we took them to the stuffed toy section at Babies R Us to see if they would choose their security object (so they could ease up on the binkies). Our son C was not terribly enamored of any of them because he was already quite fond of his blanket, but our daughter E reached right out and grabbed this pink puppy and cuddled it up to her face. Lovie came home with us that day.

Because this was not our first rodeo at Parenthood Ranch, we also brought home a couple of copycat Lovies — you know, just in case one got lost or left behind or shredded in the washer. We’d had that kind of Knuffle Bunny scenario happen with our oldest years before, and we are nothing if not teachable. We’d learned to rotate them in and out of play so that they would wear evenly. You can’t pass off a suddenly puffy, fluffy puppy when the other one’s stuffing had been mashed down by hours and hours of hugging.

But a funny thing happened. Before E started preschool, she noticed the differences anyway. We weren’t fooling her at all. I’ll never forget the day she toddled up to me and said, “Where’s Lovie’s sister?”

“Lovie’s sister. This one is not Lovie —  it’s Lovie’s brother. I need Lovie’s sister,” she explained, patient as a saint. 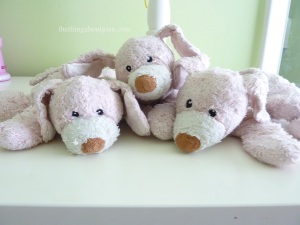 The trio of Lovies

So I gave her all the Lovies and asked her to explain the differences. I still don’t know how she tells them apart, but she knows. She knows because they have been there for her through dark nights, scary thunder, boredom, long road trips, vacations, fights with her brothers, illness, and fever. They have attended “school” and tea parties in her room. They’ve watched TV with her. They’ve listened to her read stories and poems, and occasionally they’ve acted in her plays. She doesn’t need them as security objects anymore, but, as E says, it’s nice to know they’re still around, somewhere under the bed or in her closet. You know, just in case.

When they were little, I watched my children take such comfort in their particular lovies that I remember thinking how amazing it was that a stuffed toy or a blanket could help them garner their courage or soothe them. It seemed like magic.

Around this time, I took up knitting and one of the first projects I finished was a baby blanket for our godson. It became his special blanket — so much so that his mother asked me to make him a second one. And I became hooked not only on knitting, but knitting something special for other people. I wanted to wrap everyone who needed a little extra love in some hand knit item, so they could find the magic too.

For me, there’s something satisfying and almost mystical about making a blanket or scarf or hat for someone you don’t even know. Every stitch I knit, every color choice I ponder, I’m thinking about who might receive it. I want them to be able to feel how much love I’m pouring into that project just by holding it.

I know I’ve spoken about charity crafting before, but I wanted to highlight a couple organizations that are close to my heart:

1.  Project Linus. I’m particularly fond of this organization because their mission is to give handmade blankets to kids in hospitals and shelters around the country. I dare you to read about how they got started and not cry.

2. Red Scarf Project. Years ago, I read about this initiative on Now Norma’s blog. She was asking for folks to send in their beautifully handknit scarves for the people who had recently aged out of the foster care system and were attending college — out there all on their own. To participate, you can visit the Foster Care to Success web site for details. 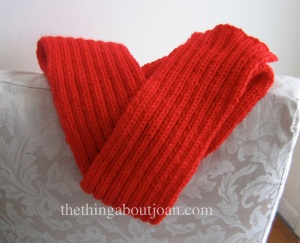 One of my Red Scarves, knit in 2×2 rib in a cherry red cashmere blend. So soft!

If you’d like to get involved in charity crafting, there are loads of resources to help you. Books have been written about it (such as Craft Activism: People, Ideas, and Projects from the New Community of Handmade and How You Can Join In by Joan Tapper, Gale Zucker and Faythe Levine). There are websites and Facebook pages dedicated to it. On Ravelry, the amazing online community for yarn-a-holics, there are 738 groups about charity knitting/crocheting, as well as patterns, advice on technique, and support from other knitters.

To me, it’s a win-win. You make a lovie doing something that you love to do and give it to someone else who needs one. I can think of no better way to spread a little lovie magic this Valentine’s Day.

For more crafting/creative love, don’t forget to click over to read these wonderful posts from other Collectively Creative bloggers:

Mom of three who knits a little, bakes a lot, crafts a bit and blogs about it all.
View all posts by thethingaboutjoan →
This entry was posted in Crafts, Family, Knitting and tagged charity, Collectively Creative, kids, knitting, lovies, quilting, sewing. Bookmark the permalink.

38 Responses to A little Lovie magic